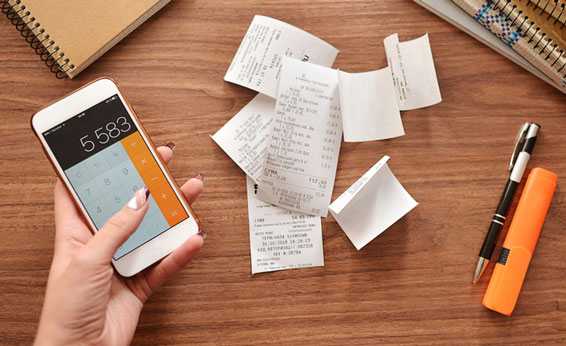 Use our profiles to quickly access data by geography

States Compare your state to others, complete with rankings.

U.S. Counties Compare your county to others nationwide.

View our most popular topics

Read some of our data stories 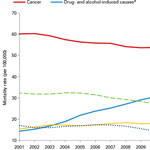 Causes of death for working-age population

Wages as a percent of personal income 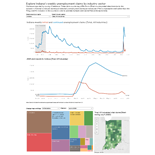 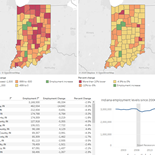 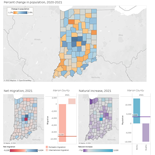 For the latest in-depth health statistics across the state, visit Indiana INdicators, a collaboration between the Indiana State Department of Health, the Indiana Hospital Association and the Indiana Business Research Center.

At the turn of this century, cancer and heart disease were the leading causes of death for the prime-working-age group in Indiana, just as they were for the population as a whole. The state’s mortality rates from these causes have both declined by roughly 25% since. Indiana’s mortality rate from substance abuse, meanwhile, has increased by nearly 3.5 times over the same period and is now the leading cause of death in this age group.

From the article: Indiana’s life expectancy falling further behind U.S.

Wages and salaries as a percent of personal income, selected states

Since 1969, wages and salaries have been declining as a proportion of overall personal income. (Note: Data for 2009 are intentionally omitted because it was such an unusual year due to the Great Recession.)

From the article: As a measure of economic well-being, per capita personal income ain’t what it used to be

Indiana’s annual rate of house price appreciation for the second quarter of 2021 was more than twice as large as the previous high set just the year before, and more than three-times as large as any annual increase seen before this recent run-up in prices.

From the article: Indiana’s positive housing market outlook for 2022